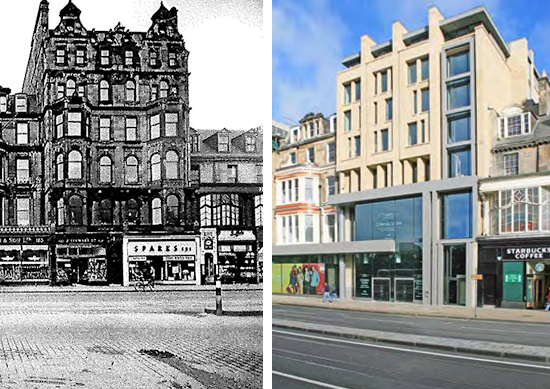 This compromised site had been subject to a number of redevelopment proposals. The majority of the schemes promoted a combination of retail on a large scale format or retail, with offices on upper levels.

The Deramore Property Group had a successful relationship with New Look, having delivered a new store in Belfast. New Look had a requirement to improve their Edinburgh offer.

Hendersonherd had formed a relationship with Premier Inn. Their expansion plans and specific requirements were known and understood.

Deramore acquired the site in 2008. It was recognised by Hendersonherd that the initial option of a speculative office development to the upper levels could not be considered risk averse, with office demand and rental levels curtailing. Detailed analysis was conducted of various options, all of which sought to take account of prevailing and projected market conditions. Hendersonherd promoted a hotel led development to the upper levels, with a view to securing a pre – let, long term commitment.

As the development progressed the economy deteriorated, bringing into sharper focus the value of long term prelettings and their impact upon liquidity and ultimately the ability to secure a sale in a restricted debt and purchaser market.